After the long wait caused by COVID-19, Rocklin High School sports are picking back up again 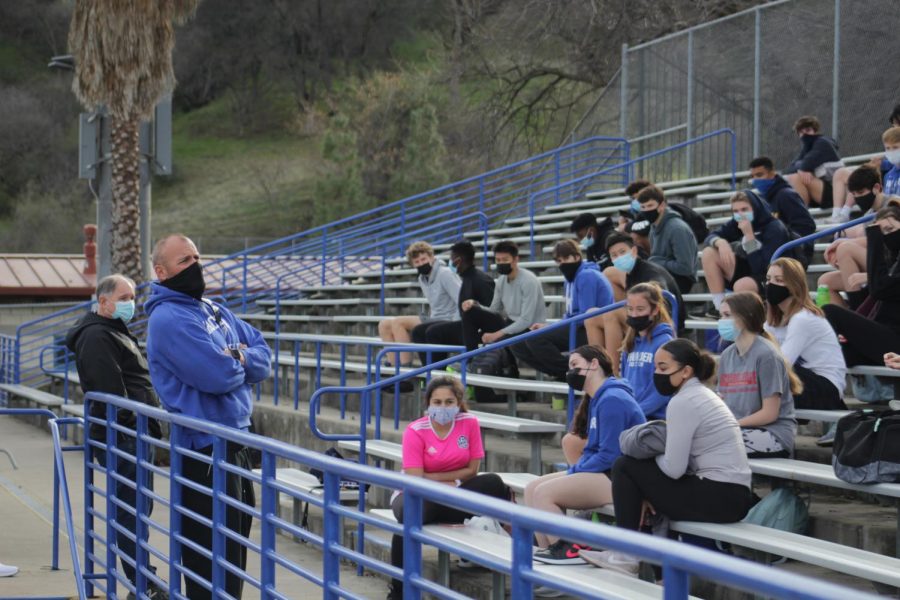 After an abrupt shutdown for spring sports last March, when schools closed due to COVID-19, Rocklin High School coaches and athletes were eager to start up with practices again in hopes of having a season during the 2020-2021 school year.

Since June, the football team has been on and off the field, as restrictions were lifted and placed again due to Coronavirus numbers. In order to get in what training they could, the football players were conditioning and doing weight training, and occasionally getting on the field when they could. Other teams like girls and boys water polo have been training on and off since the fall, in order stay in shape for if their seasons could start back up.

Girls Head Coach April Kenitzer described what it was like practicing with the restrictions they had at the beginning of the fall:

“We definitely started off in pods and then it kinda progressed into [passing and sharing] a ball… and it definitely put a huge damper on our training because even sharing a ball is just a very little part of the actual game… It was just a lot of conditioning and that does start to wear on kids after a while.”

Kenitzer reflected that even with the restrictions making it difficult to construct fun practices, the safety they provided was worth it; the team even took breaks from their training in order to prevent the spread of COVID when it became present among the girls.

Due to the color tier system for sports beginning again, water polo is one of the many that has not been able to officially start their season yet. Once restrictions are lifted as the COVID situation gets better, there will be more normalcy with more sports teams up and running again.
Students are only allowed to participate in one sport at a time. This means that a lot of multi-sport athletes will be unable to play both of their sports if they take place at the same time.
For now, Rocklin is lucky enough to have multiple teams starting their seasons, leaving coaches hopeful for outdoor moderate-contact sports to begin as well. As of the first week of February, the track and field team, as well as the swim and tennis teams have been able to hold official practices.

Matt Eckman, Track and Field Head Coach, held their first practice on Feb. 3. Their season is one of the more unique ones for this year, as they have many different events for their team, including the distance (cross country) program.

For distance runners, their track season in the spring would normally be compounded with a cross country season in the fall. However, since the two seasons have been cleared to take place now, there would be a conflict if meets were to happen at the same time. To combat this issue, the distance runners will have their meets prior to spring break, and the track team will hold their preseason, without their events. That way when they start league dual meets, the distance runners will also be able to participate.

In order to maintain a safe environment for sports, students are only allowed to participate in one sport at a time. This means that a lot of multi-sport athletes will be unable to play both of their sports if they take place at the same time. However, since the track team works in tandem with the cross country program, those runners are going to be able to participate in both track events and cross country meets.

“It’ll be interesting because kids will have to choose [between which teams they participate with], so it’s a little bit less stressful for the distance kids for sure,” commented Ryan Spears, Rocklin High School’s athletic director.

Of course, as COVID restrictions decrease, Rocklin’s athletics will continue to command the campus’s attention; it’s only a matter of time before the Thunder starts to rumble again.

Listen to the podcast hosted by Morgan featuring RHS coaches and the athletic director: