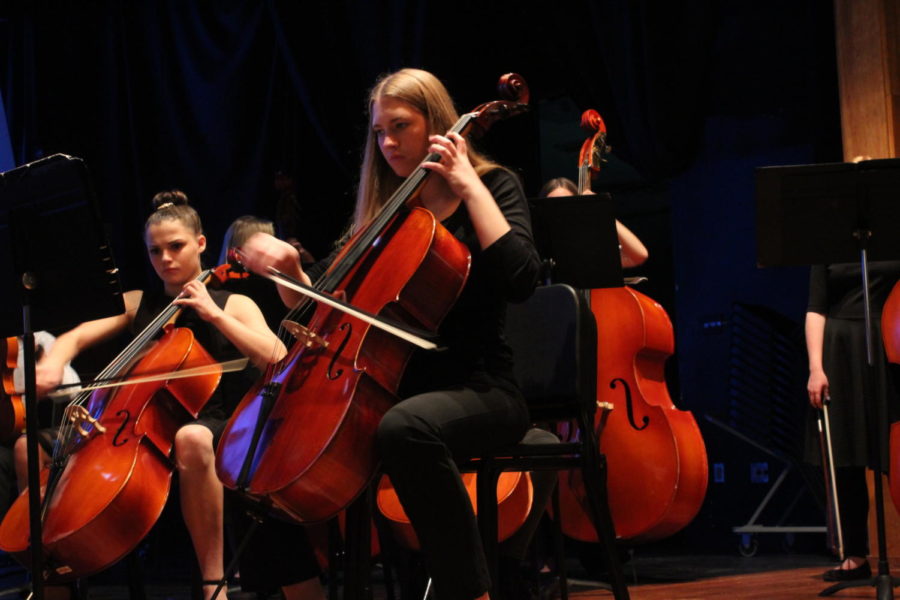 Joy and melancholy, mingled with excitement, filled the air during the Instrumental Concert on Tuesday November 19th, as Rocklin High School Orchestra put on their annual fall concert in the theater.

Expectant families and friends filled each row to experience their child, niece, nephew or grandchild perform on stage. Sitting in the theater you could hear each family chattering during intermission about how proud they were to be watching and listening to the concert.

Many of these students showed their dedication and emotion about performing with Marina Carty saying, “Performing is really nerve racking to be honest, but after doing it so many times, it’s just really fun to perform in front of my family and friends and I get the sense of accomplishment after showing them what we’ve been working on for months.”

Thomas Douglass the conductor of RHS band said as he opened the concert each song will hold a certain emotion from uplifting, to sadness and excitement and even fear. These pieces mirrored the emotion of the audience and the performers. The reality of it was seniors were sad because it was their last performance in high school, while parents were excited and shared their emotions with each song playing.

Multiple seniors are sad knowing it’s their last year in the Rocklin High music program and get emotional about leaving behind the new relationships and bonds created through the four years here.

“Being my last year is honestly really sad because I’ve made some really close friends in that class and I know when I graduate, we won’t talk as often as we do right now,” shares outgoing senior Marina Carty.

On a personal level, she talks about how good relationships are the reason for hard work and that they accomplish more because they get along and have the same work ethic to do better and grow. Everyone in that class, she claims, is always nice and get along which makes it that much better.

Students also talk about what a great teacher Mr. Douglass is and how he is very passionate in music. “Extremely strong minded and passionate especially with tempo and dynamics,” says Marina.

Marina continues that most of the time class is very easy going and flows well, but once the concert comes around it gets more serious and more effort is put into each class to perfect each chosen song for the concerts.

“Usually practices are really productive and when we get to perform it shows all the hard work put into the music throughout the year,” said sophomore Will Criste.

Overall, the instrumental concert was a fest of thrill with more than one emotion capturing the moment.