The stress underneath Rocklin's AP craze. 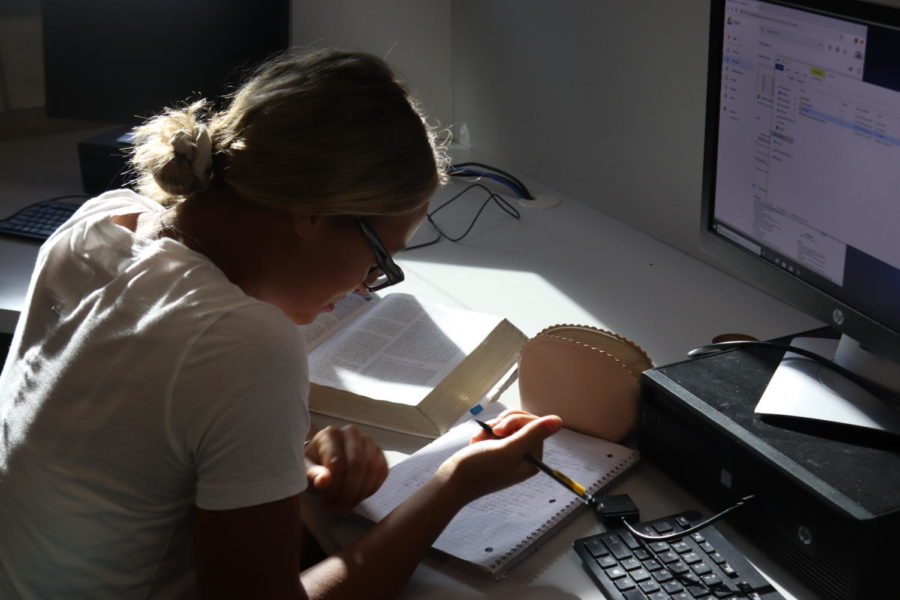 Captured by Will Zito

Oh, the act of banging one’s head against the desk, how I do not miss you. Here at Rocklin High School, students are very familiar with that act because most have AP classes that lead to that scenario. Although AP tests in May are far away, it would seem that AP stress is all-year-round.

But why take on something so stressful in the first place? The reasons may vary, but when asked, students like senior Ethan Hoffman replied that it’s because they “want to expand on their knowledge and curiosity on a subject.”

Even with natural curiosity, however, stress is still bound to come up. According to Ethan, it’s not the content that’s the source of his and others’ stress; it’s the teachers.

“AP classes have a delicate balance,” said Ethan. “They either attract teachers that take care to expand a student’s passion or ones that teach exclusively to the test . . . it’s such a pain to have the latter kind of teacher, and that’s truly what makes a class stressful for me.”

That’s the view of a student, and it’s one many might agree with, but for teachers, that doesn’t seem to be the case. Mr. James Grace, the AP Language and Composition teacher, shares his own view on things. Although he acknowledges the stress behind these classes, Mr. Grace believes that anyone that’s “capable and motivated” should take an AP class they’re interested in.

He also says that AP classes are a good preparation for college, not to mention the benefit of skipping mandatory classes if you can pass the AP test. Senior Luna Sutton agrees with that statement. She says that all her college friends find most of their classes much easier than the AP courses they’ve taken before.

“I think a big part of that easiness is because AP classes provide such a strong exposure to the rigor of college that it prepares [students] more,” said Luna.

In addition to that, Mr. Grace offers his theory as to why students find AP classes so stressful; it’s not because of the coursework, it’s because of students’ high standards.

“I don’t think [AP classes are] that unrealistically stressful,” said Mr. Grace. “I think the stress that students put on themselves is based on the fact that they’re taking these college-level classes and are expecting themselves to maintain perfection. To maintain a 100 percent or even a 90 in an AP class is extremely difficult, but as soon as you’re able to stomach getting a B or even a C, then there’s less stress.”

High-school students do tend to have high expectations for themselves. AP Psychology teacher Mr. Eric Sturgeon comments that these high standards have a lot to do with our society today.

“I think the stress stems from culture,” said Mr. Sturgeon. “Universities and colleges are harder to get into these days, so there’s a fear that scores need to be higher and that students need to have more AP classes to have a competitive advantage among their peers.”

Mr. Sturgeon also offers his own ideas on Mr. Grace’s theory. He says that another part of the stress stems from what he calls “Cognitive Appraisal,” which is how subjective interpretation can affect a person.

“In terms of the disparity between getting an A in an AP class versus a C, it comes down to the perception of the student,” said Mr. Sturgeon. “If they can see an AP class as a challenge rather than a threat, the stress level is lower. But the problem with students is that when they see the word AP, it’s translated as a threatening situation, which throws the brain into a state of fight or flight, where the brain then cuts off glucose from the brain, stopping students from reaching reason-based thoughts and throwing them into a blind panic.”

Nobody is perfect, so students need to learn to set realistic standards on themselves to avoid this kind of AP stress, even if the test is an entirely different matter. Mr. Grace even says that “worst-case scenario, even if you don’t pass the test, now you’ve gained enough experience to make your college course much easier.”

AP classes are tough. The resulting stress is inevitable and comes in overwhelming waves, but that doesn’t mean that the students of RHS can’t adapt to them.