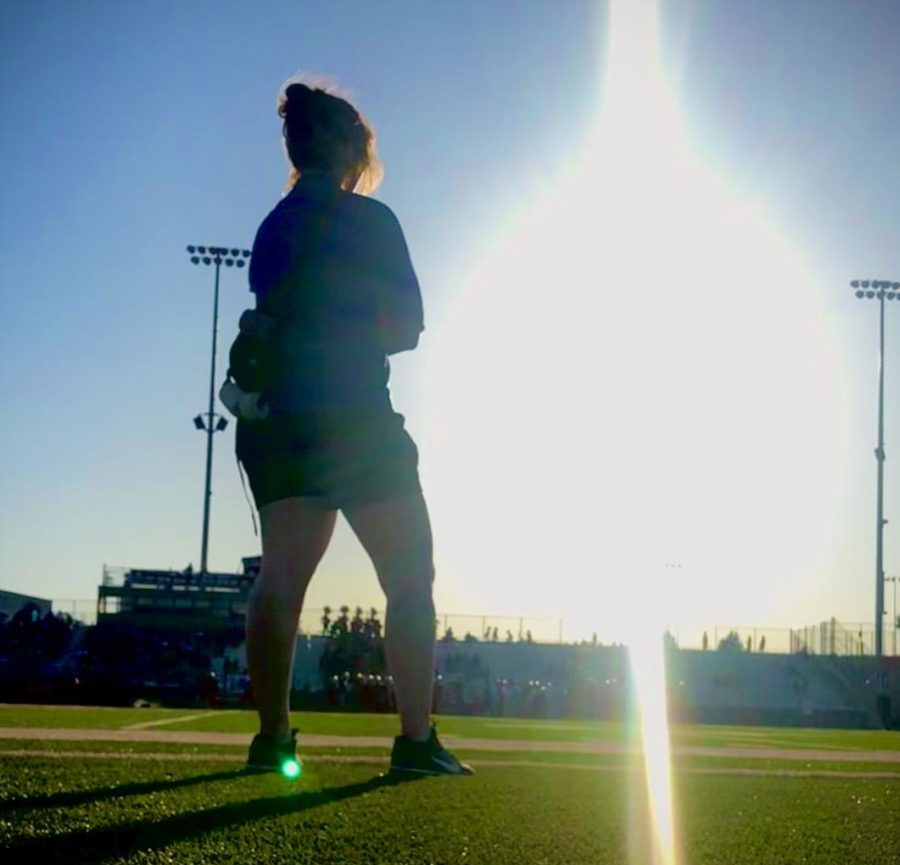 “I texted Ms. [Debby] Devinna on September 20 of 2018 saying ‘Happy Birthday,’ and she replied back saying ‘There may be an opportunity in Sports Medicine for you here at Rocklin High School . . . email Mr. Stewart.’ So I did and I pursued it, and here I am today,” Ms. Tori Walter states with a flashy smile on her face. Although it seems like Walter got her position at RHS through sheer coincidence, it took some time to get where she is today.

It all began in 2007 here at Rocklin High for Walter when she had mistakenly ruined her original plan to become a cheerleader.

¨I showed up to cheer tryouts three days late, and Ms. Devinna told me I couldn’t tryout for the cheer team anymore, but that I should show up to the P.E. classroom after school the next day, and she introduced to Sports Medicine,” Ms. Walter explains.

A spark had started a fire in Ms. Walter’s heart and that spark was the introduction of the Sports Medicine program.

From there on, Sports Medicine was what she lived for, putting all of her time and effort into helping the athletes at Rocklin High School throughout her junior and senior year. With her newfound passion also came new experiences that were uncommon, such as when Rocklin’s football team went to state in 2009, which she, as well as the rest of the Sports Medicine team, got to attend from the sidelines.

“On top of playing sports, I did Sports Medicine because it gave me joy. I didn’t really understand what people meant by following your passion, but [I knew that] this fueled my fire.”

After graduating Rocklin High, Walter played soccer at American River College in Sacramento, and after taking some time to decide what career path she wanted to take, she chose nursing. She realized that nursing wasn’t what she was meant to do, after she took and retook multiple chemistry classes (sorry Mr. Paul Werner and Mrs. Michelle DeMaria).

Two years after transferring to California State University, Monterey Bay, she began an internship for athletic training and picked up a job to help her financially through her undergraduate degree.

“I was a massage therapist full time and a student full time, which is how I was able to live [in Monterey].”

With this job, came more life experiences that many don’t get to say happened to them, like working with the San Francisco 49ers, which Walter explains that “when I [she] was massaging the 49ers, that’s when I knew that working with professional athletes was what I wanted to do.”

With her aspiring goal to work for the NFL, her mentor at CSUMB advised her to apply to the University of Arkansas. Walter soon after found out that she had been accepted and had to attend school by the 31st of May. She graduated on the 18th of May at CSUMB, meaning that she had two weeks to go home to San Luis Obispo, repack her car — as well as her parent’s — and head across the country to  Arkansas, which she did successfully and arrived on the 29th.

As soon as the school year began, so did sports.

“[During] fall of 2017, I was with football as my first clinical site, which was another pristine thing to be a part of. I was just put on this pedestal with football, and I was pumping myself up.”

Then reality hit, and it hit hard. “I didn’t fit in at all when I got there. I was the loudmouth girl from California, and I was personable. People tried shutting me down, but little did they know that when they did that it . . . just rallied me up even more.”

With that attitude, Walter decided to apply to all 32 NFL teams for the position of Athletic Trainer.

Still, Walter pressed on, asking herself “What now?” She decided to become an assistant for an anatomy class at the University of Arkansas and fell in love. She began teaching anatomy to the fellow college students, giving her experiences teaching and working with others. She decided to take this passion back to Rocklin High School, where she can be found Monday through Friday in her classroom teaching Biology and Sports Medicine, in the athletic training room, or up on the football field laughing on the sidelines during practice.

Can’t find her there? She’s most likely off campus attending a sports event, such as volleyball, water polo, football or tennis.

Most would describe Walter as a consistent, helpful and trustworthy person who students or athletes can go to, which she makes clear every time she interacts with students and staff on campus.

Although it’s been over five years since she walked the halls of Rocklin High as a student, the memories of high school still flood her memory daily as she remembers her life here at Rocklin High.