The Eye of the Storm

A behind-the-scenes look into the work and history behind Rocklin High School’s rallies. 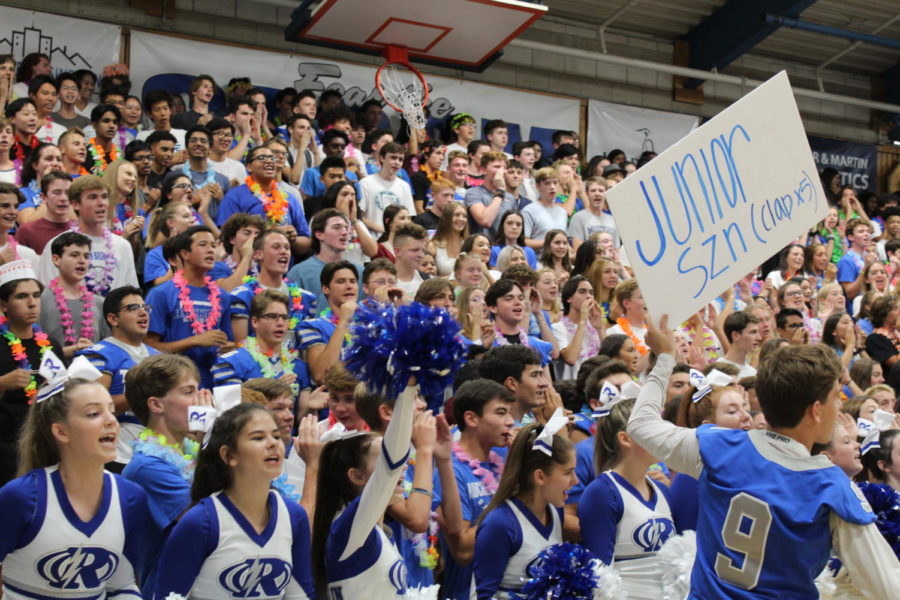 The heat. The sweat. The noise. That’s the first thing students of Rocklin High School complain about when it comes to rallies. But then, a beat of silence . . . the crowd roars to life at the sight of Excalibur. Those roars encompass all the energy and school spirit of RHS, and it’s what keeps the rallies so alive.

Rallies are known for their intensity in terms of loudness and competition, and those new to RHS might be overwhelmed, but there seems to be something that attracts newcomers nonetheless. In fact, Journalism and Yearbook Teacher Mr. Joshua Rubinstein loved it so much, he pulled his kids out of school to experience the rally, too.

“I love the energy and the fact that classes compete against each other,” said Mr. Rubinstein. “It just feels like a really good school spirit [activity]. I’ve taught at other schools where students didn’t care about school spirit, so I really liked that, too.”

The energy is contagious. It’s even more thrilling when you’re leading the insanity, as senior Taylor Hall said. As a storm leader, it’s her job to “get the student section loud and energetic” and come up with chants and themes.

“It feels amazing to be a storm leader,” said Taylor. “I want everyone to have a fun experience regardless of their grade, so it’s awesome to know that we are making a difference on campus and off-campus. This experience has made my senior year amazing, and I hope and believe it’s been making the year amazing for other students as well.”

As amazing as it may be, it takes a lot of work to get to where rallies are. The planning process can be tedious, and anyone in the Associated Student Body (ASB) program knows that.

According to senior Ella Schwasnick, Commissioner of Spirit Committee, planning rallies starts as early as May, during the annual retreat. In addition to summer meetings, ASB plans out the upcoming rallies for the next year, ranging from themes to the tiny details of activities and dress-up days for Homecoming week.

They also begin working on rally skits, which includes coordinating auditions for actors and writing the script. Since actors don’t have microphones during the rally, ASB also starts recording voice-overs and editing the audio. That’s not even mentioning building all the necessary props, which falls to the Construction Committee.

In the end, all that work is put to the test in a rally run-through the night before the actual rally, running from 6 to 10 p.m. The next day is show time, where all that hard work pays off in the form of hundreds of students cheering their hearts out.

However, ASB members aren’t the only people who play a part in these rallies. Activities Director Mr. John Thompson offers advice but leaves it up to ASB students if they want to follow his advice or deviate from it.

Believe it or not, rallies haven’t always been this way. Most of what happens in rallies came gradually, evolving and changing as the years passed. For example, skits weren’t even a part of rallies until students asked for it, and they became an exclusive part of each year’s Homecoming rally. Eventually, skits became a part of every spirit week’s rally.

Still, one part of rallies has stayed the same since the opening of the school: Excalibur.

“The only vision I had when we started these rallies was Excalibur,” said Thompson. “Because in a large setting like that, it can be hard to communicate what you want students to do, when you want them to be engaged. and [when to] pay attention to what’s going on on the floor. So, I created the spirit stick, . . .  named Excalibur, that was utilized to communicate to the crowd.”

Like Excalibur’s namesake, Rallies have always been an essential part of RHS school spirit. It’s a storm, one that won’t be dying out any time soon.