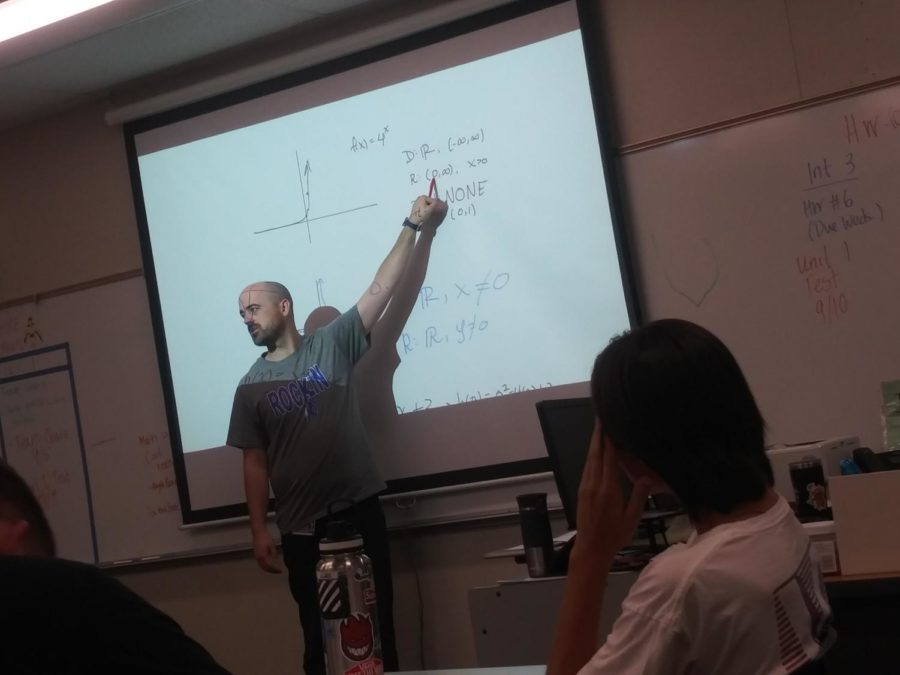 Sometimes the future isn’t what you make it out to be. Sometimes you waste time working towards something, only to realize it’s not what you want. Mr. Colin O’Haire understands that feeling perfectly after joining the Rocklin High School staff this year. Having grown up wanting to enter a business, he did not expect to discover a passion for teaching math.

“When I first went to college, I had a major that was like Business/Econ, and I was going to do whatever would come from that, like be a CPA [Certified Public Accountant],” O’Haire said. “But my freshman year I [decided] ‘I don’t like this’, so I went and changed to math and started down the path to becoming a teacher.”

As a kid, O’Haire has always liked math. That passion sprang from his elementary teacher for three years. O’Haire says that he’d always looked up to her, and one comment especially impacted him.

“When I was in first grade, we used to play Around the World [a math game],” O’Haire said. “I used to always win that [game] and my teacher said ‘wow, you’re a real mathematician,’ and I really took that to heart. I can trace back to how good that felt.”

When it comes to his interest in teaching, however, his grandfather was his role model. Though he was “a very stoic and grumpy old man,” his strong influence on his surrounding community was something that O’Haire admired.

“My grandpa was a teacher, and he was kind of a big deal in the district I grew up in, NAPA,” O’Haire said. “He was a principal, a dean and a teacher, and a lot of people knew him. His name always came up when people saw my last name, and I always wanted to follow in his footsteps. It was just really cool, hearing people go ‘Oh, O’Haire! You related to Bernie?’”

Although his interest in teaching was born early on thanks to his grandfather, there were two more factors that helped him make a final decision.

“One thing that’s really stuck with me was the school schedule,” O’Haire said. “I like having summers off, have the holidays off, and that was always something in my head. Like, what if you just had to work all the time. There are people working in July, that sounds terrible. And teachers were always my go-to role models, I always looked up to them and appreciated the relationships I had with my teachers. I think I just wanted to be the next generation of that.”

After getting his dream job, he launched his debut in Dougherty Valley High School in San Ramon, remaining a teacher there for nine years. But as much as he liked where he was, the growing expenses in the area made it impossible to settle.

“I really liked the school I was at,” O’Haire said. “I was a big deal there, loved the kids and the staff I worked with, but it just wasn’t realistic that my wife and I were gonna settle there. It was just too expensive, so we’d always be renting.”

Having heard a lot about the Rocklin area, O’Haire decided to move to Rocklin and restart his career here in Rocklin High School. It also helped that it fit all of his criteria.

“We were looking for a place that had a good community and school for our kid, but we also wanted something affordable, and Rocklin was the number one that came up,” O’Haire said. “When there was an opening here and my wife got a job at Rocklin Elementary, we were able to buy a house. Now, we have a nice community and place for our daughter to grow up. That was our main motivation.”

No matter how perfect Rocklin seems to him, he still faced some struggles during his transition.

“It’s been hard,” O’Haire said. “I’m pretty overwhelmed right now, kind of in the weeds, but I think it’ll even out once I get used to it. I think I like it now, I’m just behind. It was hard and there was a lot of grief involved, but you just rebuild it. Do it again.”

O’Haire says that, although both DVHS and RHS are similar in terms of being high-achieving schools, there are some demographic differences that he doesn’t like.

Despite that, O’Haire likes RHS and sees a lot of positivity in the staff. He believes that with the help of that positivity, transitioning has been much easier. Not easy, but easier.

“I like it [RHS], I’ve never felt more welcome,” O’Haire said. “The people are so warm and welcoming and hopeful. It’s very non-characteristic of where I was; the people [at DVHS] were just not as friendly and open and helpful, and there’s so much experience here, it’s awesome.”

In the end, no matter how hard and stressful his job may get, O’Haire loves his job and advises aspiring teachers to keep going.

“The quality of life is really high, but you really have to want to do it every day,” O’Haire said. “A lot of teachers get burnt out. It’s a lot of work behind the scenes, and the social tax of having to interact with [people] and care for [students] and try to keep an eye on [students] and teach, you know, a couple 100 kids . . . But I also think that if it’s something you love, it starts to feel easy because of how much you enjoy it.”

And true to his word, he tries his best to make his students enjoy math as much as he does. It shows in the way he jokes around and indulges students’ whims. He’s even willing to give them a five-minute break in order to give them a breather.

In return, his students seem to really enjoy his class and appreciate his efforts.

“I think Mr. O’Haire is really committed to creating an environment where students feel comfortable to share and answer questions,” said Emily Broad, a sophomore. “He also wants to be comedic and not take himself too seriously.”

“He’s very friendly,” said junior Breanna Slater. “You don’t have to worry about getting the answer wrong or not knowing it because he’ll go over and explain it no matter how many times you need it.”

O’Haire is an understanding teacher that sacrificed his comfort zone for the sake of his family’s comfort, and though the ride’s been bumpy, he knows he won’t regret his decision.