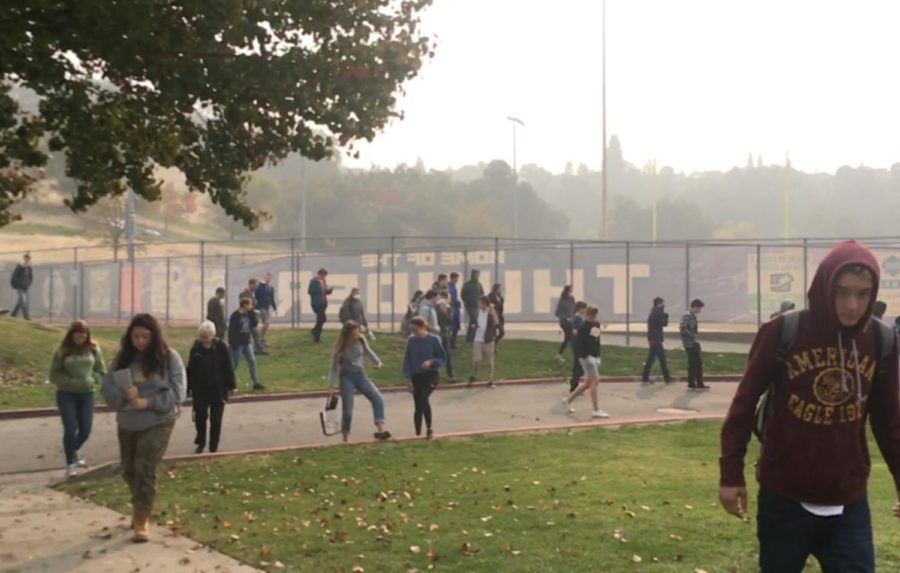 Being outdoors in such unhealthy conditions can be extremely detrimental to students health.  According to U.S News, an Air Quality Index of 150 is equal to smoking 7 cigarettes a day.

Yesterday, the PMI peaked at 330, which in turn lead to numerous school districts canceling school.

That same night, Rocklin Unified School District released an announcement saying school would still be held, but students would be encouraged to stay indoors.

Teachers who usually leave their doors open now have to close them. Students are encouraged to spend break, plus and lunch in either the cafeteria, classrooms, gym or library. Although these options limit exposure to the smoky air, there is no escape from the sometimes long walks to these locations.

Today there are 365 students absent today, about 16.7% of the student body is absent. On a normal day, only about 5% are absent.

However, some students are only here because of classes they cannot afford to miss.

“My parents did not want me to come to school today, but I had student conducting responsibilities because my teacher is absent today,” said senior, Aly Cahoon.

For others it brings up serious health concerns and issues.

Gino Buencamino, a sophomore at Rocklin High, was on the ground coughing on Friday and as a result went up to Tahoe this weekend to escape the smoke. However, when he returned things were just as bad.

“I got a particle mask, otherwise I wouldn’t be able to breathe because of my asthma. It has gotten worse since Friday. I got my mask at the Roseville Fire Department. I am fine as long as I have my mask, but otherwise I..probably wouldn’t be able to come to school..I have what I need to be healthy, but for people who don’t have what they need it seems detrimental,” said Gino.

During sixth period today, the fire alarm went off, forcing students and teachers to evacuate the classroom and stand outside in the smoky air for about 10 minutes.

When school was announced to still be held, the District promised to keep students indoors as much as possible, but what  they did not factor in was the fire alarm incident.

With the air condition constantly fluctuating, students are curious what the school’s next course of action will be.