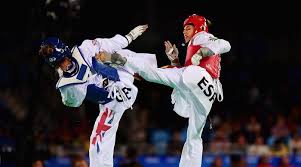 Every year, a Taekwondo tournament is held which awards a few students the title of National Champion. Christian David Ygay, a Junior RHS student was fortunate enough to be one of those students.

With so much to learn and do at the events, one might assume quite a lot of training happened beforehand. He says that while he did train, it was not as much as one might expect for such a large scale event.

“I would say that I trained, but not excessively…not like Rocky cutscene training.” Christian says.

Soon after competing in the smaller tournaments, he discovered he placed first in Poomsae and earned enough points in the other areas to be one of the top four participants.

The event had a center, right, and left judge, each of whom were looking for unique criteria. The left judge paid attention to hand techniques and blocks; the right judge focused on his feet, stances and  kicks; the center judge judged overall performance and spirit. After all the participants have performed, they are given a score between 7 and 9.9 for each category.

It lasted from five in the afternoon to two in the morning. The reason behind the length of the event is due to the number of participants in attendance. The attendees were divided into groups, ranging from children under the age of ten all the way to senior citizens as old as sixty.

In the end Christian David Ygay’s training paid off in the end, and placed him on the metaphorical RHS athletic hall of fame along with many other talented students.