Twenty One Pilots makes their comeback with their new album Trench 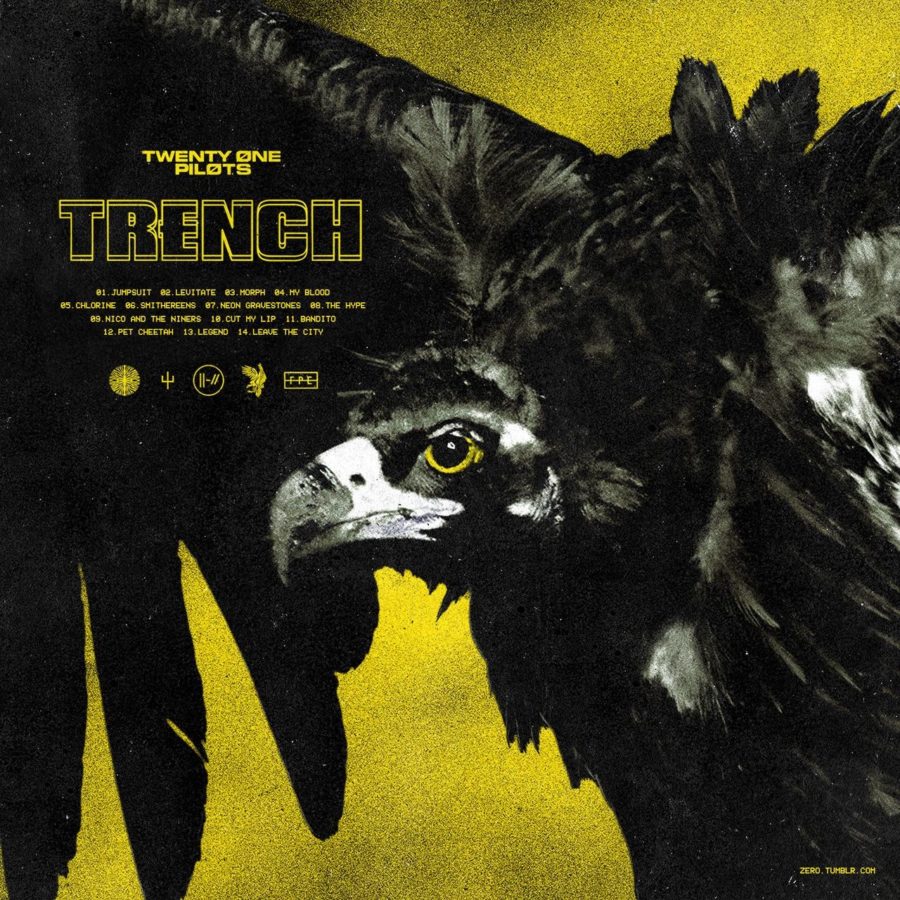 After a year long hiatus and numerous cryptic messages to fans, Twenty One Pilots has finally made their musical return.

The new album,Trench,was released October 5th, months after their singles “Jumpsuit” and “Nico and the Niners” were released on July 11th.

The two songs released this summer were not the best choice for singles. They are both extremely alternative songs, and it wasn’t very appealing to people who were not previously fans.

The singles were very similar to the style of their previous album “Blurryface”. If their goal was to only appeal to previous fans to get them excited, then they accomplished that well.. However, there are many fans that actually preferred the alternative pop-rock style of their second album “Vessel”.

Overall,the duo just did not have the smartest marketing strategy. If they would’ve released two different songs, they might’ve gotten more pre-orders.

The album definitely did not disappoint though. It’s estimated that 120-130,000 copies of Trench will be bought this week alone.

Every single song has a different sound to it, as many Twenty One Pilots albums do.

In addition to this, the lyricism of lead singer Tyler Joseph is absolutely incredible. Throughout the album he makes many parallels to his life, as well as many great metaphors.

Some examples from my personal favorite song off the album “Chlorine” include:

In the intro, we get a distorted voice saying “So, where are you? It’s been a little while.” This refers to the year long hiatus, and how their last studio album was over 3 years ago.

The main hook of the chorus is “Sippin’ on straight chlorine. Let the vibe slide over me.” Despite this line seeming quite simple, it’s up for many interpretations.

Obviously, drinking chlorine can kill you. This could be an allusion to Tyler’s off and on  continuous struggle with suicidal thoughts.

On the other hand, chlorine is a substance made to keep things clean and kill unwanted chemicals. So this line could be a metaphor that Tyler is trying to rid himself of the dark thoughts.

The third verse features the line, “Now different lives I lead, my body lives on lead. The last two lines may read incorrect until said.”

The “my body lives on lead” line is likely synonymous with his songwriting. Tyler has mentioned many times that writing is therapeutic for him.

“The last two lines may read incorrect until said.” is referring to how sometimes when you just read his lyrics, they don’t make sense. It’s only when he sings them, and you can hear the passion behind his voice, you can understand them.

It’s only right that the second member of the band, drummer Josh Dun, gets credit too. The melodic beats that he creates are absolutely addictive. He can make a great rhythm for anything from a headbanger, to a ballad.

That being said, Trench is an astounding album. Not a single song has the same sound. It also brings in elements of their previous albums that the fans very much enjoyed.

Tyler Joseph’s songwriting ability is showcased in every single song on the album. He makes beautiful parallels to his life and makes it catchy.

Even if alternative music isn’t your forte, I advise you to try listening to at least one or two songs on the album. The songs are so diverse in sound that you will likely find something you are fond of.

Overall, Trench tells a story of struggle and hope, and it’s absolutely worth the listen.