Why the “Change My Mind” Series is Successful

Steven Crowder is a comedian and runs a successful political Youtube channel, his most popular series of videos is the “Change My Mind” segment. His least watched video has over 1 million views. Crowder himself is a conservative, but you don’t have to agree with his views to watch. Instead, opposing views are encouraged to watch, that’s the whole point of the segment.

The “Change My Mind” Series currently has 11 videos, each varying in length from 20 minutes to two hours. The series started on October 21st,2017. Steven Crowder visits well known universities and sets up a table with a banner in front, with his stance on different controversial topics politics.

While Crowder was setting up his video, “REAL CONVERSATIONS: Male Privilege Is A Myth | Change My Mind,” a photo by an unknown user spread throughout social media and became the hottest topic of reddit for two days. People photoshopped his banner into different topics that are argued on a more comedic level. 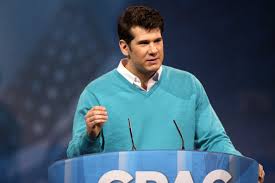 His most popular of the “Change My Mind” series is “REAL CONVERSATIONS: There Are Only 2 Genders | Change My Mind”. The video was made 4 months ago and has almost 8 million views with 272,000 likes and 12,000 dislikes.

The point of the series is to show what college students know and believe.

In Crowder’s own words, he said, “We want people to question their views and see if their argument is rational.”

Crowder tells the students to change his own mind on the subject. His mind has not differed much, but he has changed several others’ opinions and sees a new way of looking at the subject at hand each episode.

The segments are not arguments, but good discussions to get everyone’s minds thinking, no matter where you may fall on the political spectrum. Crowder only discusses with opposing views, in order to “Change [His] Mind”. Talking with the same views happens often on the major news channels creating echo chambers, and not receiving new and fresh perspectives.

Crowder’s first “Change My Mind” features him debating with college students, and seeing why they are not “Pro-Gun”. Crowder is polite in his conversations, but firm in his opinion

. He comes across just a few people in his series who aren’t polite, but most are willing to sit down and have a civil and positive conversation.

His most recent “Change My Mind” video is a segment, which is a follow up to one of his previous videos. He asked two college girls who are against the pro-gun stance to come to the shooting range with him and go through the process to buy a gun and debunk some of the myths they’ve heard. The two women learned the basics of firearm safety, shooting and the process of actually purchasing a gun.

Crowder’s channel in the past few months has grown incredibly fast. According to socialblade.com, Crowder is gaining over 6,000 subscribers and over 1 million views each day. He also comes in the top 3,000 channels in subscriber count with 1.8 million and counting.

The series Crowder has created thrives because it consists of raw, uncut and unfiltered conversations with college students around the country. Crowder has discussed with many opposing views because of this segment and will continue to see opinions from different views. Crowder does this segment to give truth to the uninformed and see what the other side thinks. He is speaking directly to the people and providing fact based discussions, how most situations should be.