A Summary of What Was Said and Done 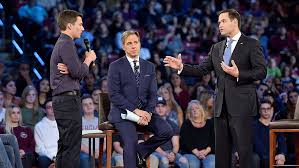 The purpose of the Town Hall meeting was to let people voice their opinion on what happened and what we can do, but it quickly turned into a debate.

Fred Guttenberg was the first of all representatives of Parkland to speak; his daughter was killed in the shooting. He spoke with Sen. Rubio.

Guttenberg started out by saying, “Your comments this week, and those of our president, have been pathetically weak…Look at me and tell me guns were the factor in the hunting of our kids in this school this week. And look at me and tell me you accept it, and you will work with us to do something about guns.”

As Rubio tried to reply, he was silenced by booing from a majority of the Parkland audience. After a couple minutes of Rubio and Guttenberg going back and forth, Rubio got off his first reply to the original question. He said, “I absolutely believe that in this country if you are 18 years of age you should not be able to buy a rifle and I will support a law that takes that right away.”

Rubio and Guttenberg go on to talk about how they want bump stocks banned with the support of President Trump.

Guttenberg says, “Senator Rubio, my daughter running down the hallway at Marjory Stoneman Douglas was shot in the back.”

Guttenberg,”With an assault weapon, the weapon of choice.”

Gutenberg,”OK. It is too easy to get. It is a weapon of war. The fact that you can’t stand with everybody in this building and say that, I’m sorry.”

Gutenberg is wrong here about AR-15’s. An AR-15 is not a weapon of war; it has not been used in any war. Instead, the automatic counterpart, the M4A1 has been used in war, and is illegal to buy or own as a citizen without the proper license.

Rubio replies to him by saying, “I do believe what you’re saying is true. I believe that someone like this individual and anyone like him shouldn’t have any gun… But I want to explain to you for a moment the problem with the law that they call the Assault Weapons Ban… First you have to define what it is. If you look at the law and its definition, it basically bans…about 220 specific models of gun….But it allows legal 2,000 other types of gun that are identical….They’re indistinguishable from the ones that become illegal. And the only thing that separates the two types is if you put a plastic handle grip on one it becomes banned, if it doesn’t have a plastic handle it does not become banned.”

Gutenberg replies, “Are you saying you will start with the 200 and work your way up?…It’s a place to start. We can do that.”

Rubio answers, “So in New York they have passed that ban. And you know what they’ve done to get right around it? It took them 15 seconds to do it. They simply take the plastic tip off of it. They just take the plastic grip off of the front or the back…The same gun and it becomes legal, performs the exact same way…That’s why it failed in ’94. It’s why they’re getting around it now in California, it’s how they get around it in New York — is we instead should make sure that dangerous criminals, people that are deranged cannot buy any gun of any kind. That’s what I believe a better answer will be.”

The mainly Parkland crowd then booed Rubio and allowed Rep.Ted Deutch to debate with Rubio about banning all semi-automatic rifles.

The next highlight of the town hall meeting was with 17-year-old Emma Gonzalez and National Rifle Association Spokesperson Dana Loesch.

Emma started her question to Dana by saying,“Dana Loesch, I want you to know that we will support your two children in the way that…you will not. The shooter at our school obtained weapons that he used on us legally. Do you believe that it should be harder to obtain the semi-automatic and weapons and the modifications for these weapons to make them fully automatic like bump stocks?”

Emma’s opening of her question to Dana is despicable. She is inferring that Dana doesn’t protect her children, simply because she disagrees with Emma’s point of view.

The Las Vegas shooting was the only mass shooting with a bump stock. Emma also says that bump stocks make semi-automatics fully automatic. The bump stock replaces the pistol grip and stock, and to start firing, the user has to put pressure on the front of the gun, towards the barrel. It absorbs part of the recoil and gives it quicker trigger pulls, mimicking an automatic.

Bump stocks are also not a modification, but an accessory, and there are numerous other accessories that do this but aren’t on the news. There are special triggers, cranking devices, and other options, all of which are accessories rather than conversions and/or modifications.

Dana replies, “Well first off Emma, I want to applaud you for standing up and speaking out. And for anyone who has ever criticized you or any of these students up here, including people who have been on my side of this issue, I don’t think that anyone should deny you your voice or deny you your position because you are young.”

Sheriff Israel then says, “Let me interject for a second, though…You’re not standing up for them, until you say I want less weapons… Number one, you’re right, we have to take weapons out of the hands of people that suffer from mental illness…We have to be able, when police encounter someone, who is going through a mental illness. We shouldn’t have to wait until they are a danger to themselves or someone else. We should be able to take them to an institution that’s going to examine them and take weapons away from them right then and there, at that time.”

Sheriff Israel also told four deputies to not enter the building to stop the active shooter. He had more than 30 chances to stop the situation from happening and also had the chance to stop the severity of the shooting.  He also delayed EMT from entering and helping the children inside.

“What’s going to come out is, in the communications on several circumstances, there was the request to enter… the request was denied from Broward County,” a Florida official told Fox News.

“When you have a police agency saying we don’t want you going in, that’s a problem,” another Florida official said. “The training since Columbine has been first responders, police go in immediately with paramedics.”

The CNN town hall meeting distinguished the differences in thought from the left and right, the majority of Parkland being left and Rubio and Dana Loesch being right. These debates need to finish with agreements or understanding instead of more feuds. Arguments need to be fact based instead of being powered by emotion.