A Death to Never Forget 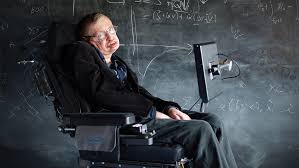 On March 14th, social media was blowing up about the news of Stephen Hawking’s death. Many people were posting memes about him joining other people who passed in “heaven.” The theoretical physicist, Stephen Hawking, passed away peacefully in his home in Cambridge, United Kingdom from his condition ALS at the age of 74.

Hawking was diagnosed with amyotrophic lateral sclerosis (ALS) when he was 21. Doctors only expected Hawking to live until he was around 23, but he miraculously pushed through until he was 74.

Stephen Hawking spent most of his life in a wheelchair and later had to communicate through a voice synthesizer operated by moving his eyebrows.

In Hawking’s book, My Brief History, he says his diagnosis inspired him to work harder and to make the most of his life while he was still alive. “At the time, I thought my life was over and that I would never realize the potential I felt I had. But now, 50 years later, I can be quietly satisfied with my life,” he wrote.

Hawking devoted most of his time on concentrating the two cornerstones of modern physics- Einstein’s theory of relativity and quantum theory.

Stephen Hawking made accomplishments that the average person could not even think of making. Despite his physical disadvantages, Hawking was extremely successful and a very intelligent man, and his name will not go down in vain.