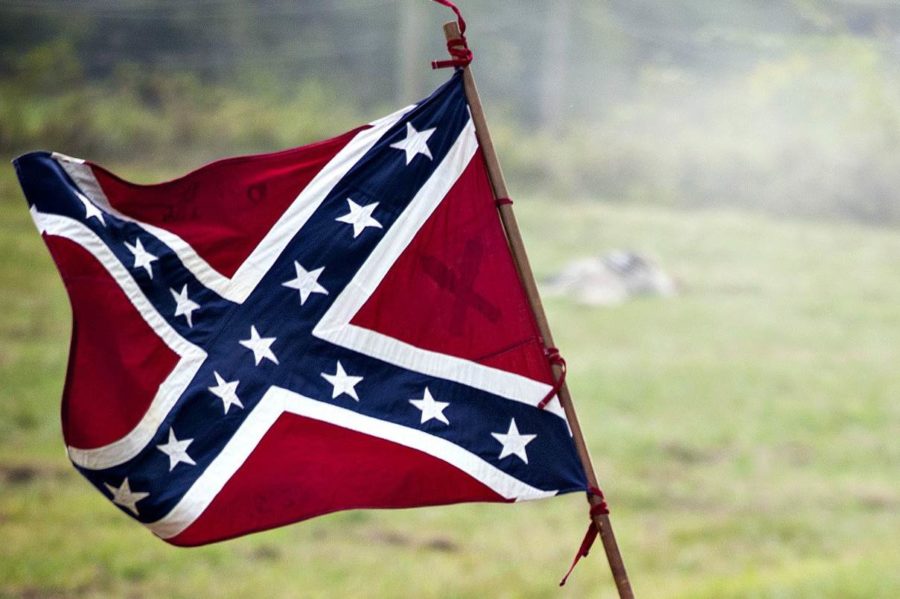 Protesters flood to the streets, bleating chants, only to be drowned out by an opposing force, armed with picket signs, screaming their own pleas for reform.

This scene has become a staple within the nation, and the recent debates over monuments erected to highlight and honor the “heros” of the Confederate States of America have only magnified the intensity of this image.

The argument surrounding the Confederate monuments speckled across the country, mirroring the spread of an infectious disease, consists of two sides.

One advocates for the statues’ removal, claiming that they validate “racist America.”  The other presses for the monuments’ preservation, citing their historical connection to a time in history most would rather regard as a blip in the timeline of American prosperity.

Even the sunshine state, home of surfer dudes and beach babes, has its own Confederate past centered in L.A.  The city served as a flame for Confederate sympathizers to flock toward following the Civil War.

The town’s population of Confederate followers slowly evolved, from supporting a secessionist mayor to advocating alongside members of the KKK for the relocation of the local population of Chinese-Americans.

At one point, a Confederate-only rest home was established to provide veterans with a place to live out the remainder of their days.  The inhabitants of this home now reside in Hollywood Forever Cemetery, where, until recently, a plaque honored their ties to the Confederacy.

A local chapter of the Daughters of the Confederacy (the owners of this plaque) removed the decoration, after activists threatened vandalism.  People gathered to protest the relocation, insisting that removing the plaque was akin to erasing their proud white heritage.

The decoration praised the empty title of “Confederate” in the same way that celebrities are idolized for their popularity on Google Search.  It’s a meaningless achievement, one that has no value.  It simply acts as a description.  Nowadays, it would be like having a monument honoring a Democrat just for being a Democrat.

“There is an awful lot of hatred being displayed throughout the country on both sides,” said the president of the Daughters of the Confederacy in the L.A. Times.  “I’m uncomfortable. I didn’t think I’d ever feel this way in the United States. It’s very surreal.”

A similar debate emerges in the town of Ft. Bragg, named for Confederate General Braxton Bragg, who had a losing streak that rivaled that of the Chicago Cub’s 108 year World Series drought.  In the same way that Bragg was gifted this town as his legacy, the city’s residents were gifted with the age-old debate surrounding the town’s name.

“He’s not here. It’s really none of his business what we call ourselves,” Mayor Dave Turner said in the Sac Bee.

The argument exists only as a nuisance for the town’s’ residents, who claim that at this point it would just be too costly to change the city’s name.  Besides, residents have mostly forgotten their namesake, since the city has evolved and changed into a place that if Bragg were still alive would scare him straight to the grave.

In the same manner, the original ideals of Confederacy has transformed into Neo-Confederacy, where white supremacy has found a home.

Confederate pride has allocated for institutions like the Traditionalist Worker Party to form and masquerade as merely a gathering of proud white folks.

The group, with a chapter in Sacramento, exists with the intention to form an all-white state that places value on a woman’s ability to keep her womb occupied and regards all non-whites as evolutionary mistakes.

Their ideal government is a Neo-Nazi, Neo-Confederate state brimming with contradictions and fascism.

It seems as though groups like the Traditionalist Worker Party gain more standing each time civil rights are brought into the limelight.  Trailing behind them as a symbol of pride emerges the Confederate Flag.

The flag was a rarity in the south following the Civil War, but as the Civil Rights movement gained traction, the flag remerged among the ranks of Dixiecrats and politicians who felt that their privilege was at risk.

The Confederate flag remerged, following World War II where, “it had a second life. And that life was associated with defiance of the federal government and opposition to the Civil Rights and racial equality of the African American population in the South,” states David Goldfield, a historian from National Geographic.

Supporters felt that the flag represented their heritage and that it deserved to be publicly celebrated atop state capitals and in city halls across the country. In actuality, the flag was a reminder that there will always be people who see their privilege as a fact of life.

The Confederate flag has reemerged throughout history as more than just a recognition of the Confederate States of America. It serves as an example of the ingrained injustice of American history. This truth hides behind the facade of “heritage.”

When advocates claim that the monuments and decorations honoring the Confederacy need to be preserved to protect history and their heritage, they’re preserving the racial oppression that the Confederacy now stands for.  They’re supporting institutions, like the Traditionalist Worker Party, and the use of Confederate symbols to demean and belittle those seeking justice.

These statues aren’t symbols of history or pride, but reinforcements of the fact that American history is inherently oppressive, a fact that isn’t about to change any time soon.